Winnemucca Lake is dry lake located on Highway 447 north of Nixon and south of Empire. To the west is Pyramid Lake.

This page contains links to original materials about the area. 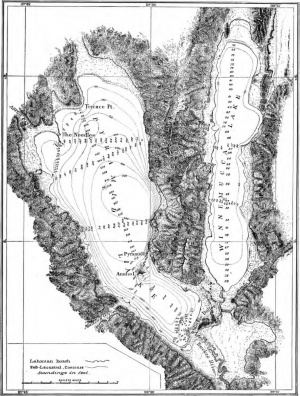 N.A. Hummel, General history and resources of Washoe County, Nevada, published under the auspices of the Nevada Educational Association." archive.org(1888):

History of the Comstock Silver Lode and Mines (1889) Part 3 "Winnemucca Lake. This lake lies to the east of, and parallel with, Pyramid Lake, from which it is separated by only a single ridge of gray rock and sand. It lies principally in Humboldt County, though a part reaches south into Churchill County. The lake is now about sixty miles long, with an average width of twelve miles. Of late years it has been rapidly increasing in size, as more water has been flowing through its feeder than formerly. It has on the east side a high rocky ridge, like that which separates it from Pyramid, therefore it lies in a trough between two ranges of hills. Though so near to each other, the surface of the water in Winnemucca Lake is, forty feet lower than that in Pyramid. The Piutes remember a time when all was one lake. Were the waters of these twin lakes now united they would make a lake quite as large as the great Salt Lake of Utah. The inlet to Winnemucca Lake contains several old rafts of drift-wood, which prevent a free flow of water through it. Some years ago a freshet lifted these rafts from the bed of the stream, and the water found a channel beneath them. Since that occurred Winnemucca Lake has been steadily increasing in size. There are many Indian traditions connected with these lakes, one of which is in regard to immense animals that once herded in the neighborhood. This seems to be a tradition of the elephant or mastodon. All this region was once covered by an inland sea of fresh water, over 200 miles in length, and 80 or 90 miles in width."

"In 1952 Philip Orr began excavating a series of rockshelters on the east side of Winnemucca Lake. The work, conducted under the auspices of the Nevada State Museum, the Western Speleogological Institute (Santa Barbara Museum of Natural History) and National Geographic, was intended to salvage materials threatened by guano mining and private collectors."

"The first excavations were at Stick Cave and Crypt Cave. Stick Cave was a cache cave which yielded basketry, fishhooks, caches of chub, points, and a small painted granite effigy. Crypt Cave was used for habitation and burials. In addition to a number of mummies, this site yielded a cache of grasshoppers and a horse bone which could indicate association between Pleistocene fauna and humans (Orr 1952)."

"During 1952 through 1955 work continued at five other Winnemucca Lake Caves. Potentially most important is Fishbone Cave, where cultural materials may be associated with extinct Pleistocene fauna. In a pre- liminary report Orr (1956) describes stratigraphy in this site. Level 3, which consisted of dust, ash, burned guano, and other perishable organic matter included one Pinto and one Amargosa Point. Fragments of horse and camel bone found in Level 3 are believed to have originated in Level 4. Level 4, which underlies Level 3, contains more sand and less perishable material. It has been intruded upon by many cache pits from Level 3, result- ing in some mixing of the deposit. Level 4 includes horse and camel bone and brush that was radiocarbon - dated to 10,900 +/- 300 B.P. String, basketry, netting, and matting were all found in Level 4. Also, in Level 3 an awl made of horse bone was found. Thus, Fishbone Cave is very important in that it may show the contemporaneity of man and exinct fauna in the Great Basin. However, most students of Great Basin prehistory hesitate to accept this evidence in its present preliminary form (Heizer and Baumhoff 1970:3-4)."

"In another of the Winnemucca Lake Caves, Chimney Cave, Orr found a mummy which was radiocarbon- dated to 2,500 B.P. (Orr and Berger 1965). This specimen was used to test reliability of radiocarbon dates on various types of materials, Close agreement was found among dates on skin tissue, bone collagen, and vegetal clothing."

"Although other brief accounts of the Winnemucca Lake Caves excavations are available (Orr 1955, 1972, 1974), a final report for these important sites has not yet been written. However, several papers do deal with specialized aspects of the Winnemucca Lake Caves. Harrington (1959) described an un- usual atlatl- flaking tool combination found in Cowbone Cave. Sears and Roosma (1961) analyzed pollen from guano and fishbone. Although their results support the Altithermal concept, with an extreme of aridity at about 6,250 B.P., lack of a continuous profile and provenience for some of the samples hamper their study."

"Finally, Rozaire (1974) has described basketry from these sites in detail, relating technique of manufacture to function of the basketry and considering temporal and areal distribution of the various forms represented in the Winnemucca Lake Caves."

"During work in caves at Falcon Hill on the northern end of Winnemucca Lake in 1959 through 1961, the Nevada State Museum made surface collections at the nearby Coleman Locality (Shutler n.d.). Artifacts from the Coleman Locality were briefly mentioned by Tuohy (1968) and by Warren and Ranere (1968) who relate them to the San Diequito Complex. These materials have been described and analyzed by Don Tuohy (1970). Of the four localities which Tuohy considered, one is a basalt quarry, two are workshops where basalt was the primary raw material, and one was a campsite. Projectile points and other artifacts were clearly comparable to Anathermal aged materials from Hathaway Beach. Tuohy also compared the artifacts from the Colman Locality to MacNeish's postulated Blade, Burin, and Leaf-point Tradition, which might date between 30,000 and 11,000 years ago."

"In 1961 Richard Shutler, Jr., of the Nevada State Museum conducted archeological investigations at a number of archeological sites in Washoe and Churchill Counties. Among these were 11 caves and rockshelters at Falcon Hill, on the north end of Winnemucca Lake (Shutler n.d.).:

"Follett (1963) published a general, preliminary account of the Falcon Hill materials, proposing that they represent a "Lakeshore Ecology Phase" which may be contrasted with the Desert Culture concept. Radiocarbon dates from the Falcon Hill sites indicate a lacustrine adaptation by 7,590 B.C. Shutler also suggested that there was strong archeological continuity between the Lakeshore Ecology Phase and the historic Northern Paiute."

"These preliminary and specialized reports do not deal with the full range of materials from the Falcon Hill sites. These sites are treated in detail by Hattori (1982)."

"Traveled North twenty miles. No signs. Turned east, crossed low range of granite hills to Mud Lake, the sink of the east branch of Truckee. Owing to the soft and miry nature of the ground could not get our horses to the lake, so we traveled north ten miles to Lost Springs. Plenty of grub, but the springs are only holes-in-the-ground, not large enough to put a bucket in; improvised a pump by tying strings into the rim of an old wool hat (like boys string kites), then with a long pole pressed into the crown of the hat we soon raised water for ourselves and our half-famished horses. 50 head of cattle."