Trego is the location of a former station on the Western Pacific Railroad and a current siding. Trego Hot Springs is located about 2 miles northeast of Trego on the railroad tracks.

The name "Trego" dates from the 1910's, just after the railroad was built. Previously, the springs had names like Hot Springs, Kyles Hot Springs (1864), Butte Spring, and Butte Hot Spring.

Today, Trego is best known for its hot springs, which is a long ditch with a mud bottom. The springs are at the north end, near the railroad tracks, and the water flows south. Garside reports that the springs have a temperature of 187F.

Fairfield states that in 1856, Ladue Vary and Fred Hines discovered the springs that were later named Trego when they took a short cut from Granite Creek (now known as Granite Ranch) across the playa towards Rabbit Hole Spring. When they arrived at the Humboldt River, the met a wagon train on the Nobles Trail. Vary and Hines told the emigrants about the spring, and the emigrants took the shortcut and the Nobles trail was adjusted accordingly. "Hot Spr" appears on the 1857 map "Map of the Western Division of the Fort Kearney South Pass and Honey Lake Road" at that location. (Ladue founded Deep Hole in October of 1856 and then later founded Varyville). "Hot Spr. Sta" appears in an 1876 map.[1]

The 400 foot long trench was initially hand dug by a group led by Frederick_W._Lander in 1860.

Amesbury reports two 1861 entries from the diary of Edith Lockhart:

"August 18: Pleasant day. Started at noon and went 18 miles to Rabbit Hole Springs, rested a couple of hours and went 18 more miles by the next day to Hot Springs."

The area was named Trego around the time the railroad came through. Carlson and Basso state that Trego was named after nearby Mount Trego, which is formally known as Old Razorback Mountain. The name Mount Trego appears on the Pershing County Assesors Map and on the 1968 and 1971 NV DOT Maps. The earliest citation for Trego is a Railroad timetable and map that that mentions Trego and that states that "Through passenger service between San Francisco and Salt Lake City will take place August 22, 1910." An April 29, 1912 newspaper article that states that "" Borax" in the water from Trego was the cause of a train engine boiler explosion that killed three people.

The 1914-1915 WPRR Descriptive Time Table states: "Queer hummocks are scattered over the surface and not far from the tracks at Trego, formerly Trego Springs, are the Double Hot Springs, steamy in winter. The old overland trail passes here. The sharp bluish spurs of the Granite Range, soon to be crossed, are plain ahead on the right. From the Granite Range will be sighted California"[3] Double Hot Springs are many miles from Trego.

In February, 1921, three unidentified bodies were buried at Trego. In June, 1922, there was interest in these bodies when a few weeks prior a body was discovered in a shallow grave near Gerlach. Joseph Romeros was convicted in the Gerlach killing.[6][7]

Unlike nearby Frog (Garrett Ranch) Springs, Trego is on public land. 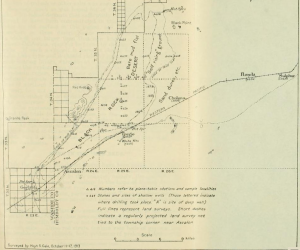 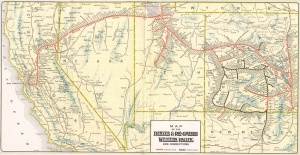 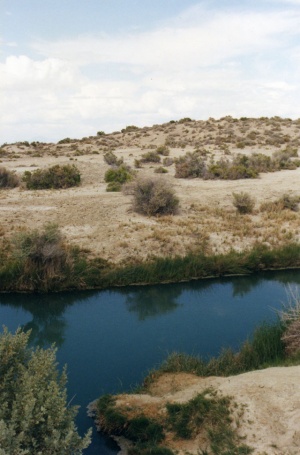 The Nevada State Museum surveyed 86 miles along a proposed Bell Telephone undergound route in 1971. Among the sites found during this survey was 26Pell8, a major occupation site near Trego Hot Spring. Test excavations showed signif- icant depth and cultural features. Nevada Bell funded large-scale excavations by the Nevada State Museum under the field supervision of James Toney in 1972. Some further field work was done in 1973.

The first published report of this site was by Jonathan Davis and Robert Elston (1972) who described its stratigraphy. They interpreted the startigraphy in terms of climatic variables. Sometime before 3300 B.P. a deep lake occupied the playa. The lake receded during a dry interval (possibly the Al ti thermal ) . Between 3300 and 1400 B.P. moister conditions produced an ephemeral lake, and the major occupation of 26Pell8 occurred at this time. Around 1400 B.P. the climate again became drier, then moister again, and, finally, the dry conditions which prevail today were established.

In 1980 Susan Seek completed a comprehensive report on 26Pell8. She listed the radiocarbon dates, which ranged from 3810 B.P. to 1120 B.P. (Valastro, Davis, and Varela 1979), and related them to the climatic and cultural sequence. Cultural features and artifacts from the site were described in her report which also included a number of specialists ' appendices (Clark 1980; Danise 1980; Davis 1980; Rosen 1980; Stearns 1980; and Wright 1980). Seek concludes that 26Pell8 was occupied between 4000 B.P. and 1000 B.P. Plant foods, jackrabbit, and cottontail seemed to be emphasized. The occurrence of semi -permanent structures suggests extended occupation and Seek concludes that 26Pell8 was a summer camp from which people exploited lacustrine resources on the now dry playa.

"In 1853 when he was seventeen years old Fred Hines crossed the plains with Dr Minor. He passed through this valley over the Noble road and went on to Shasta and mined there until July 1856. Then he Ladue Vary and A U Sylvester came to this valley; Vary to prospect, and the others to trade with the emigrants. They went out to Lassen's Meadows on the Humboldt and stayed there until the last of September or the first of October. During that time Hines and Vary came back to Deep Hole springs with a pack train. When they went back Hines concluded to go straight across from Granite creek to Rabbit Hole and save a good many miles of travel. They did this and about midway between the two places found some hot springs. Shortly after they got back to the Humboldt an emigrant train came along. They were going over the Noble road and Hines told them how to keep his trail and find the hot springs. They followed his directions and made a new road which was traveled after this instead of the old one."

Trego is named after the Western Pacific Railroad siding. But who was Trego?

The text of this page is available for modification and reuse under the terms of the Creative Commons Attribution-Sharealike 3.0 Unported License and the GNU Free Documentation License (unversioned, with no invariant sections, front-cover texts, or back-cover texts).