Rabbit Hole Springs was the last water before Black Rock Point on the Applegate-Lassen Trail. In 1849, Joseph Goldsborough Bruff stated that there were many dead animals around Rabbit Hole. In August, 1860, Frederick W. Lander built an 80,000 gallon concrete tank at Rabbit Hole. 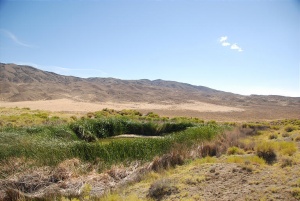 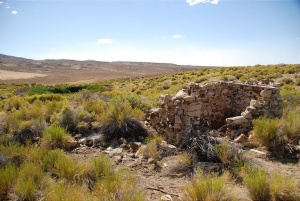 "Great numbers of rabbits came around us and we killed all we wanted of them. This is the place always since known as the Rabbit Hole Springs." Lindsay Applegate, 1846

In June 1864, Company D of the Nevada Volunteer Calvary passed through "Rabbit-Hole Station".[1]

Smith and Vanderburg (1932) state that gold was mined at Rabbit Hole.[2]

There are various spellings. The USGS Map says "Rabbithole Springs". "Rabbit Hole Springs" is what was used by pioneers.

Water is scarce along the Applegate Trail; however, there were several main locations that emigrants depended upon for their water supply.

During the massive westward emigration in 1849, many emigrants found the spring at Rabbit Hole disappointing. The Applegate’s blazed the trail for the purposes of Oregon-bound emigrants and as an escape route in the event of hostile interaction with the British. The trail was not meant for the passage of thousands of emigrants in 1849. Consequently, Rabbit Hole was less of an oasis and more of a frustration for weary, thirsty travelers. Wells had to be dug in order to retrieve a decent amount of water, and if one arrived later in the day, especially later in the year, the water supply was certain to be low.