In 1888, it was reported that Jungo Point was a stage stop on a mail route between Winnemucca and "Denio's".<ref>"Beevities - Local and General Intelligence," Reno Evening Gazette, July 19, 1888, p. 3.</ref>

The town of Jungo is said to be named for Jungo Point, which is a survey peak located 11 miles from Jungo.<ref>Helen S. Carlson, "Nevada Place Names," p. 147.</ref>

Jungo, located between Sulphur and Winnemucca, is the site of a former town. Jungo started in 1910 as a station to the Western Pacific Railroad. The post office opened on January 31, 1911 and closed on May 31, 1952.

The 1914-1915 WPRR Descriptive Time Table stated: "These are the Jungo flats, a basin fifty mile in area, as level and as bare as a deal table. From Jungo many sheep and cattle are annually shipped. Westward from Jungo Is the barrier Antelope Range, over which the train climbs. The gravelly and greasy shale formations of the ascent indicate oil, and oil is being found in paying quantities."<ref>"Descriptive Time Tables, Denver and Rio Grande - Western Pacific, Winter 1914-1915."</ref>

George B. Austin lived in Jungo for many years. In 1936, Austin bought the Jumbo Mine, which was located 36 miles to the north. Former President Herbert Hoover visited the mine and pronounced that the mine was worth holding on to. George Austin offered to pay for that advice and was told by Mr. Hoover "That kind of advice is free."

Jungo was the shipping point for the Iron King Mine, located in the Jackson Range<ref>Ronald Willden, "General Geology of the Jackson Mountains Humboldt County, Nevada," Geological Survey Bulletin 1141-D, U.S. Dept. of the Interior, 1963</ref>.

Jungo Road (aka Nevada State Route 49 is the road from Winnemucca to Gerlach. Apparently, this road is also known as Nevada Road #2048 (?). Near the Black Rock Desert playa, it is known as "The High Road.". From its western terminus between Gerlach and Empire, it passes near Frog (Garrett Ranch) Springs, Trego, Sulphur and Jungo, before terminating at Winnemucca. 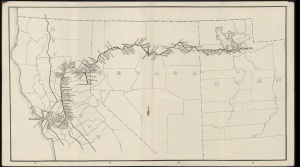